Hand signs of the Illuminati can be flashed in public by puppet world leaders and celebrities while the unsuspecting masses remain ignorant.

Like Illuminati symbols, only Illuminati insiders are aware of the true meanings hidden behind the signs, hand gestures or semaphores. Profanes, Barbarians, Cowans and other outsiders are left in darkness.

Pyramid, Eye in Pyramid, Diamond, Triangle, Eye in Triangle, Sign for the Grade of Fire, Triangle of Manifestation

The Roc Sign is made by holding out your palms while touching both your thumbs and index fingers forming a triangle.

The pyramid is an important Illuminati symbol showing their few ruling the many on the bottom type power structure. The symbol becomes more powerful when the sign is done over an eye, representing the All-Seeing eye in a capstone floating over an unfinished pyramid.

Celebrity hip-hop artist Jay-Z made the sign famous by using it as a sign for his record labels Roc-A-Fella, Def Jam and Roc Nation.

Jay-Z told the history of the Roc Sign gesture on BBC Radio’s Live Lounge. He and other employees at Roc-A-Fella Records began doing the sign to each other in their hallways telling themselves that newly- signed Christión single “Full of Smoke” would go Diamond. (5 million copies sold)

Jay Z soon began to use the sign as a semaphore for Roc-A-Fella Records, and later Roc Nation.

Jay Z’s use of the hand gesture prompted pro wrestler Diamond Dallas Page to sue Jay Z for infringing on his intellectual property because Page had used the symbol to indicate his signature move, the Diamond Cutter. (A move derived from Johnny Ace’s Ace Crusher.) Jay Z settled the claim for an undisclosed sum.

The sign has been used previously in many different contexts. In Aleister Crowley’s A.’.A.’., the gesture is the sign for the grade of fire. Wiccans know the symbol as the Triangle of Manifestation.

In the Jewish tradition it was used as the Priestly Blessing of Kohen. Star Trek’s Spock’s Vulcan salute was itself based on this Kohen blessing sign. In Ninja Kuji in magic it is the Kai (在), one of the 9 primary hand symbols used to channel energy.

The sign is also done in reverse. Current Chancellor of Germany Angela Merkel uses the “Merkel-Raute” as her trademarked sign.

The sign is made by touching your thumb with your index finger making a circle. The other fingers follow the index’s shape thus forming the tail of two 6s.

The sign is given as a pledge of allegiance to Satan. When it is given over the eye, it represents the eye of Lucifer.

The Hook ’em Horns is the sign for the University of Texas of Austin.

According to Illuminati symbolism researcher Texe Marrs in Codex Magica (Read it here, buy it here), Helen Keller herself was an occultist and in the Illuminati’s tradition of hiding symbols in plain sight and keeping the symbols real meaning to Illuminati initiates chose the sign of Satan as the deaf sign for I love You.

According to Illuminati researcher Fritz Springmeier, the sign of the horns is a hypnotic induction which triggers certain programming in Monarch mind-controlled slaves.

The sign is made by covering the other eye with the other hand with only one eye remaining visible.

The sign represents the evil eye floating above the pyramid. The single eye, or the eye of Providence originates in Egypt with the eye of Horus. In conspiracy theory lore, it represents allegiance to Satan and the Illuminati.

The Lion’s paw and other Freemasonic Handshakes

These are by far the hardest signs to identify on this list. There are dozens of Masonic handshakes and signs. The first 3 degrees of Freemsonry (Blue Lodge) alone have 5 grips and 7 different signs. Other rites connected to these three degrees include the appendant bodies such as the York Rite with 12 degrees and the Scottish Rite with 33 degrees.

There are also, irregular Masonic Lodges like the Rite of Memphis-Misraïm with 99 degrees while the Bavarian Illuminati had 9 different grips and 9 individual signs.

That’s A LOT of Masonic handshakes.

It is also incredibly difficult to determine whether are not the people doing the handshake intended it to be a Masonic handshake.

There are hundreds of variations of everyday handshakes which depend on a variety of factors including a person’s height, distance from shaker and even whether or not a person is in a hurry or not. Handshakes also vary depending on how familiar greeters are with each other.

Here are some of the more famous alleged Masonic handshake: (click image for full view)

The Bellamy Salute traditionally accompanying the Pledge of Allegiance was changed in December 1942 as it became more and more associated with the infamous Nazi Regime. The Olympic salute which is also similar to the Nazi salute has always generated controversy whenever it is.

Links to the Illuminati: The Nazi Salute based on the ancient “Roman” salute was adopted by the Nazis in the 1930s. Hitler was a creation of Illuminati bankers. General Electric, General Motors, DuPont, Ford and Standard Oil were eager to go to war and reap in the benefits. American branches of the Illuminati bankrolled World War 2 and kept feeding Hitler’s war machine until the very end of the war.

Links to the Bavarian Illuminati: No. None of the grips and recognition signal used by the Illuminati resembled the Nazi salute.

Links to Freemasonry: None. Hitler banned freemasonry in Germany because in his beliefs in the Elders of Zion and the Judeo-Masonic Conspiracy.

Hidden Hand of the Men of Jahbuhlun (Jahbulon, Jabulon), Sign of the Master of the Second Veil

Texe Marrs calls this sign the Hidden Hand of the Men of Jahbulon in his Codex Magica. According to Marrs, it represents the hidden Masonic deity, Jahbulon. The sign’s true meaning must remain hidden from the public.

No.8 Hand Over Heart

The sign is made by holding the right hand over the heart sometimes raising the left hand with the palm facing forward.

The sign of the hand over the heart represents a reminder of the Masonic obligation of silence from the Fellowcraft degree in which the heart shall be torn out if a Mason were to break his Masonic oath.

“All this I most solemnly promise and swear with a firm and steadfast resolution to perform the same, without any hesitation, mental reservation, or self-evasion of mind whatever, binding myself under no less penalty than of having my breast torn open, my heart plucked out, and placed on the highest pinnacle of the temple (some say, My heart and vitals taken from thence, and thrown over my left shoulder, and carried into the valley of Jehoshaphat, there to be devoured by the vultures of the air, should I ever knowingly violate the Fellow Craft obligation.”

No.9 V for Victory

The sign is made by holding up the index and middle fingers to form a V.
The V sign was made famous by WW2 Britain Prime Minister Winston Churchill which he used as sign of victory in war. Researcher Stanley Monteith claims that Winston Churchill learned about the sign from being a Druid since 1908. The V sign can also be done over the eye thus representing a triangle over the eye of Lucifer.

According to Codex Magic, the sign can be a sign of Satan, of malediction or the horned pagan god, Pan. It can also represent Vulcan, the ancient god of fire and destruction.

Done in the typical fashion, this sign literally means intercourse by the devil—to be violated sexually by the horned God. The thumb holding down the fingers creates the “vulva,” while the two largest fingers pointed up are the horns of the God (Satan).

The sign can also be taken to represent a chevron, the symbol of “Wrath and Destruction”. American hippies adapted the V for victory in war sign to mean peace. The hand gesture quickly became THE hand sign for peace.

Researchers often point out that the sign represents a Roman numeral five, a sign for the “Satanic Law of Fives”. However, the law of Fives appears to be a creation of the Discordian Society. The society’s Pentabarf’ is a reflection of this law.

The sign is made by raising both hands in the air with palms facing out. It looks like someone holding up their arms, as in being help-up. According to some conspiracy theorists, if a Mason ever finds himself in a court law and wishes to appeal to the Masons on the Jury or the Judge, he can perform the Grand Hailing Sign of Distress, and get a chance at getting off. Any mason hearing those words are seeing that sign is oath bound to help by any means possible.

The sign consists of raising your hand up precisely like someone getting held-up. It might look a suspicious if a mason attempted to use this sign in Court according to some legends… According to Duncan’s Monitor, not only does the sign consist of raising your arms up, which itself would probably arouse suspicion, it also involves dropping your hands down straight down and back up three times!

You’d look like a bird attempting to take flight…

Tales surrounding the death of founder of Mormonism Joseph Smith often include Smith either saying “Is There No Help for the Widow’s Son?” or [even more unlikely] performing the Grand Hailing Sign of Distress as he fell from a second-story window to his death after being shot multiple times.

The words accompanying this sign in the night, or dark, when the sign cannot be seen, are, viz.: “O Lord my God! is there no help for the widow’s son?”

Caveat lector: Are the politicians and celebrities in this article aware that they are making Satanic or Illuminati symbols? Do they know about the signs alleged occult connections and meanings? Are they knowingly and willingly pledging allegiance to Satan or to the Illuminati?Personally, I tend to make the peace sign in many pictures. I didn’t know about the sign’s possible ties with Satanism or the Illuminati before reading Texe Marrs’ Codex Magica.

Symbols can have a variety of meanings and can be interpreted differently by each individual. Jay-Z specifically explained the meaning of the Roc sign, so did Beyoncé.

Some (Most) celebs are genuinely confused as to why people believe they have joined the Illuminati or are in league with Satan.

Top Ten Illuminati Signs is a speculative article exploring Illuminati conspiracy theories and legends. See here for information on the historical Bavarian Illuminati or here for a look at modern versions of the Illuminati.

Tom likes to research conspiracy, write conspiracy and talk conspiracy. His current interests include the Bavarian Illuminati, the Illuminati and the New World Order. 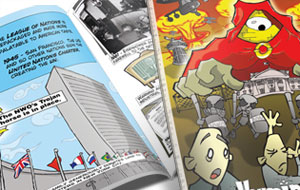 From the Old World Order to the New World Order
(Rex Shop | Amazon)
We use cookies. If you continue to use this site we will assume that you are happy with it.OkNoRead more
Revoke Cookies